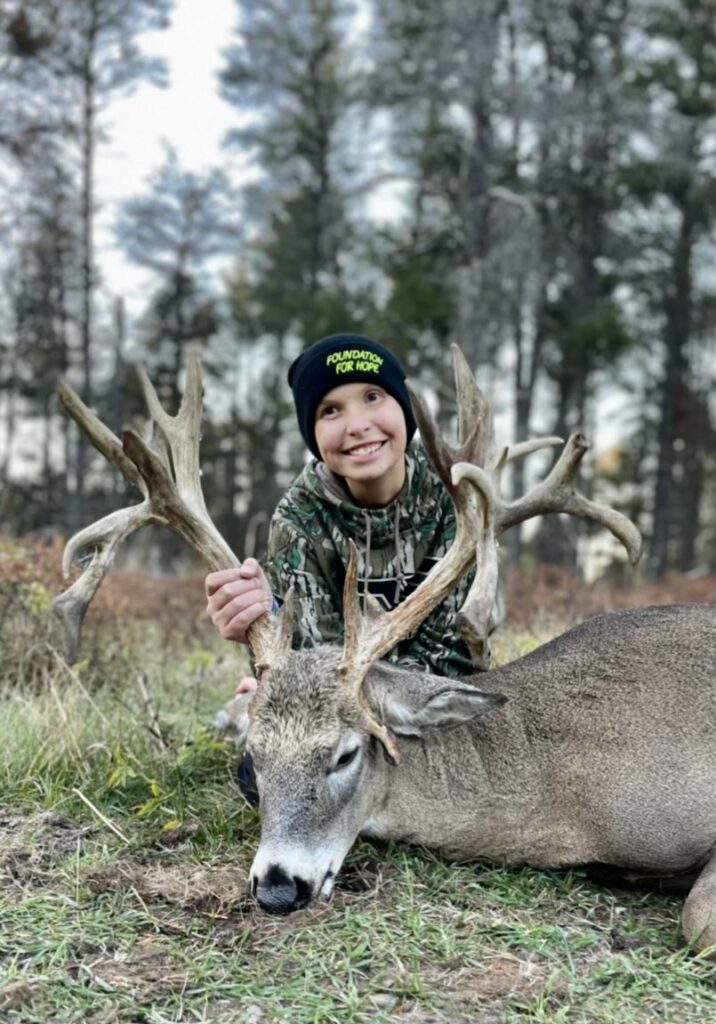 Kicking Bear closed out the month of October by heading up to Grayling, Michigan to join forces with Tony Semple and The Foundation for Hope on their annual deer hunt. The hunt is hosted by Cedar Hollow Lodge and this year five young hunters and their families came out to chase some dreams of hunting a big buck. These young men are on a wish list hunt and all the prayers were that the big boys would come out to play. 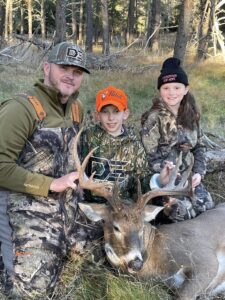 The hunting started off with a bang as Gavin brought home a monster! His buck weighed in at 287 lbs and he had set the bar high for the weekend. His buddy Carson was hot on his heels with a big boy nicknamed “Moose” because of his webbed rack. Carson was all smiles as his friend Craig helped guide him through the hunt and he got to share his monster buck with his family! 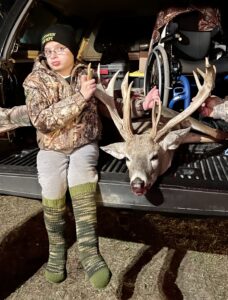 Many of the hunters were using a set up called a guardian gun. With this equipment guides are able to help overcome some of the physical challenges for the hunters. With the help of computers and cameras they guides can help hunters get their aim locked on, then with the push of a button from the hunter the guardian gun which is located outside the blind will fire. Such a cool way for technology to help make something really cool happen for hunters who just need a little help. 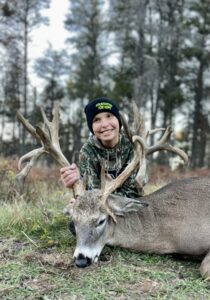 Eric and Zack were the next hunters to get on the board! Eric was on the hunt with his father and shot a nontypical buck that you just have to see to believe. What an awesome experience for a father and son! Zack and his brother were on the hunt together coming up from Ohio.  The brothers came back to camp smiling as Zack brought in a dandy of a buck. Through Saturday evening the hunting had been great! 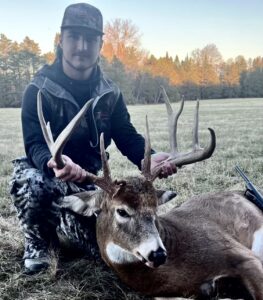 Throughout the weekend there were times for meals to be shared and hunting stories to be swapped. A crew even came in and made wood fired pizzas for the hunters and their families. Times of worship were also shared and joy filled singing around the fire filled camp.

Sunday morning brought one last chance for Travis the only hunter left to fill his tag. Travis was on the hunt with his Dad and Ray had the privilege of helping guide them. They nestled into a blind called “the doe’s nest” and were ready to see if any bucks would be swinging by looking for a girlfriend. This crew was using the guardian gun and everything was locked in as a giant buck came out and gave them a clear shot, Travis pushed the button but something got gummed up, the gun clicked, but did not fire. Blake was guiding with this group as well and he went out to check the gun. He pulled the shell and the pin had hit, but for some reason the gun did not go off. Actually, the whole guardian gun set up was failing now, so Blake went into special operations mode and as quietly and quickly as he could he set up a new guardian gun. After all, this is Sunday, the last day and Travis still needed to fill. They were back in action now, but the buck had run off.

The pressure was starting to build as time was running out and it wasn’t looking good. But just then another buck popped out into the clearing, the problem was that the buck was a smart one and had positioned himself just outside the range of the guardian gun, it just wouldn’t turn enough to get crosshairs on him. But God is good and Blake is a hero, he snuck out again and was able to reposition the gun and not scare off the deer! The crosshairs lined up perfectly and Travis made the perfect shot!! Smiles, fist bumps and hugs filled the blind in celebration as Travis had gotten his buck! 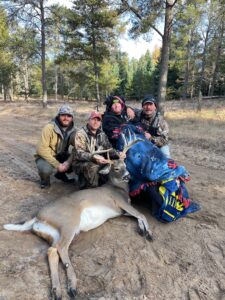 For a video of the hunt and to see the guardian gun set up click here: Foundation for Hope Hunt 2022

“Really you come here and it is unbelievable, the food and all the stuff, the fellowship. Listening to other men of God sharing their testimonies and sharing with these kids, even myself being able to spend time with Travis and his Dad in the blinds and talk to them about Jesus. I mean it is really a wonderful place to be able to share the Gospel and let these kids know that God has a purpose for them.”-Ray Howell

“Let us not become weary in doing good, for at the proper time we will reap a harvest if we do not give up:–Galatians 6:9

Kicking Bear Kansas was able to participate in the Trunk or Treat held at our local Assembly of God church, which is one of our local churches that helps put on our camp. We were able to pass out, not only candy, but some fun scripture-based activity books and over 100 New Testament bibles!! It was a fun night of showing God’s love to hundreds of kids, on a night that can surely use some of God’s shining light.   We would like to send a big thank you to pastor Rodney and his wife Kandace for letting us be a part of a great event they started many years ago!!

These community partnerships between local churches and Kicking Bear chapters is all part of our ministry vision for next year! So cool what God is doing through these loving relationships.